Benefits of Using PEX Water Lines Rather than Copper 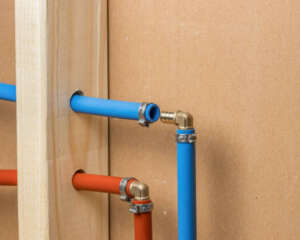 There are several Benefits of Using PEX Water Lines in contrast of Copper Lines. Although the use of copper pipes is widespread and copper has been used for many years,  PEX piping is a great alternative. Here we’ll review exactly what PEX pipe is, what it can do and why it’s a better value than copper.

PEX piping is made of polyethylene which has been treated to resist heat and cold, to retain its shape without breaking and to resist degradation due to chemicals or certain types of water.

Copper piping, on the other hand, is inflexible, susceptible to corrosion and often breaks in cold temperatures.

One of the most obvious advantages of PEX water lines is value. PEX piping is up to ten times less expensive per foot. This is partially due to the cost of raw materials used to make PEX versus copper piping. Another price factor is flexibility. Copper piping is inflexible, which means that at every bend or joint, the pipe must be cut and a coupling “elbow” or joint must be installed. This leads to higher costs, both in labor and materials. PEX piping can actually be bent, allowing plumbers to install it much more quickly and with far fewer couplings.

Else of installation is another big advantage of PEX water lines. It takes a highly skilled plumber to properly solder, cut and install copper plumbing. While many plumbers are knowledgeable in this area, those new to the industry are working more commonly with PEX. This will lead to a shortage of plumbers skilled in the installation and repair of copper pipes, making PEX a better long-term solution.

Durability is another big advantage which PEX piping has over copper. Copper is a very durable substance, which is why it’s been popular for piping for many years. However, copper pipes can become brittle and break during extreme cold. This is not the case with PEX, which can withstand extremely hot temperatures as well as extreme cold. The material can expand and contract slightly, which accounts for its resistance to extremes.

There are only two areas in which copper piping has a definite advantage. First, copper can be recycled, which makes it a more eco-friendly choice. It should be remembered, however, that with all the innovations in the recycling industry, PEX piping will most likely soon be recyclable. Copper’s other advantage is its resistance to UV rays. This makes copper the better choice for outdoor pipes, as PEX can be damaged by UV exposure.

Contamination is a potential issue with PEX piping, although this is no reason to avoid its use. Since the material can expand and contract, it is not completely impermeable like copper. This can lead to contamination, which is why many homes still use copper or other materials for in-ground pipes. In the home, however, groundwater contamination is not an issue, and so PEX is the better choice.

When cost, ease of installation, flexibility and durability are all factored together, it’s easy to see that PEX is superior to copper for most plumbing applications. Outdoor and in-ground pipes will benefit from copper, but for the pipes inside your home, PEX is a safer, much less expensive and simpler option.